Showing posts from January, 2020
Show all

- January 19, 2020
Krishna Manohar Parte along with his friends completed a trek to the Anaghai Fort, but did not return home alive. https://www.mid-day.com/articles/mumbai-dombivli-man-dies-of-cardiac-arrest-during-fort-trek/22436612
Post a Comment
Read more 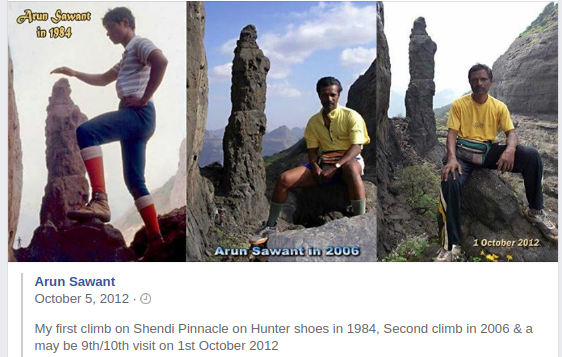 Arun Sawant (61) who started trekking in 1974 and 29 others were rappelling at Konkan Kada, a point at the fort on a trek. Sawant, who had retired as a deputy manager from MTNL last year, was trekking on the 1,800ft-high Konkan Kada cliff. “He accidentally slipped and fell 550ft below into the valley around 7pm. He had his safety gear, ” said Sachin Shinde of Nisarg Mitra who was among the rescuers. . “Also, he had trained thousands of people. It’s a great loss for the trekkers community,” Anand Gavde, said, “ He was a guru to all of us .” Read more at: https://timesofindia.indiatimes.com/city/thane/thane-rappeller-who-discovered-new-trek-route-falls-to-death-from-murbad-fort/articleshow/73404960.cms https://www.loksatta.com/blogs-news/arun-sawant-trekker-died-while-rock-climbing-from-the-kokan-kada-harishchandragad-in-ahmednagar-pkd-81-2064190/ भावपूर्ण श्रद्धांजली ट्रेकर्स च्या विश्वातील अत्यंत दुःखद घटना...महाराष्ट्राचे लाडके ज्येष्ठ गिर्यारोहक व नवीन काहीतरी करण्यासा
1 comment
Read more

- January 08, 2020
"As per rules, cooking or staying at the fort overnight is not allowed without permission," assistant director of archaeology department V P Wahane https://timesofindia.indiatimes.com/city/pune/students-get-notice-for-camping-overnight-at-pune-fort/articleshow/73157850.cms (1) These rules may be called the Maharashtra Ancient Monuments and Archaeological Sites and Remains Rules, 1962. (2) They extent to the whole of the State of Maharashtra. (3) They shall come into force on the 8th day of October, 1962. XII of 1961. (d) prohibit or restrict the felling of trees within the controlled area ;  or utilise such area or any part thereof in any other manner, without the permission of the State Government: https://bombayhighcourt.nic.in/libweb/acts/1961.12.pdf 22. Maharashtra Aurangabad Aurangabad Tomb of Rabia Daurani (Bibiki-Maqbara) Tomb and the garden 23. Maharashtra Aurangabad Daulatabad Daulatabad Fort Daulatabad Fort and monuments therein 24. Maharashtra Bombay s
Post a Comment
Read more

Do not drink or discrespect forts in maharashtra